The weirdness of floor 78 is a new exciting adventure designed for the indie hit Dead Halt.

Dead Halt is a roleplaying game about a megalithic Hotel, clunky computer consoles, modded humans going haywire, and wonderful adventures. Equip your new Maintenence crew at the random Item dispenser Gashapon in the basement, Grab a job from the Bartender, and take the elevator up to endless wonky floors beyond your imagination.

The crew received a call from room 7823: they have an issue with their air conditioning unit. It should be easy enough, even though you know deep inside they will manage to screw up this one too.

Without too many details, the crew is sent to the floor to resolve this problem. Upon arriving on the floor though, they observe that the floorplan is a bit of a maze, and after closer inspection it seems there is no sign of room 7823. Baffled, the crew has to knock on some doors hoping to find someone willing to help them in locating the room and this is where everything unfolds.

Depending on which door the crew will knock, they will meet a strange and weird character. This floor has  its own social ecosystem and unusual characters living there, with a thick tangled plot and history tying all the inhabitants together. A story that the players can unravel and learn one room at a time, while interacting with the floor inhabitants and searching for the mysterious room 7823.

The adventure’s gameplay revolves around the Crew knocking on doors looking for clues about the mysterious Room 7823, revealing the game map one room at a time while meeting the curious inhabitants of the Floor.

The Crew must show up to the rooms and read the numbers by themselves. This is important because reaching a door might trigger an event (it’s half-closed, something can be heard from within, etc.).

Most of these rooms’ inhabitants do not give real clues to the crew, they could either send them in the wrong direction, mislead them or just waste their time in a funny way.  Don’t feel forced into making each encounter “useful” for the party: most of them are designed to be a fun waste of time.

This module is an adventure of Dead Halt, so it requires the base game to be played.

As this story revolves entirely around the players having no idea about the map layout and the location of the room, it's really important to avoid them any kind of spoilers. For this reason the pdf should be read only by the Hotel Manager.

Fog of War (keeping the rooms not visible until the players knock on them) is of vital importance! This is really easy to achieve on VTT, while at the table you can just draw the map and add details when the players discover them.

In order to download this adventure module you must purchase it at or above the minimum price of $5 USD. You will get access to the following files: 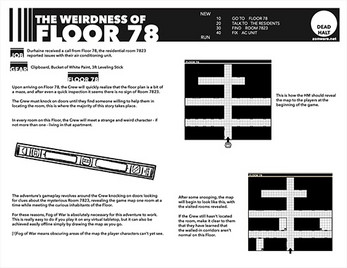 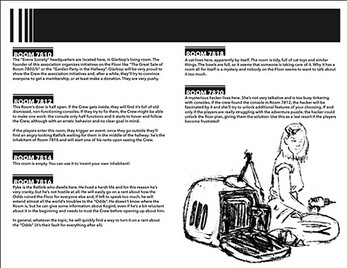